Welcome to South Western Sydney Local Health District - one of the largest health districts in the state.

The District's vision is to provide a healthcare service that is patient focused, equitable and responsive to the changing and developing needs of the communities in south western Sydney.

SWSLHD covers seven Local Government Areas from Bankstown to Wingecarribee and has a population of approximately 820,000 people.

The District is among the most rapidly growing populations in NSW and projected to grow to over more than a million people in the next decade. It is also a vibrant, culturally diverse region with almost a third of its population speaking a language other than English at home.

Oral Health, Drug Health and Mental Health services are provided at a number of facilities across the District. 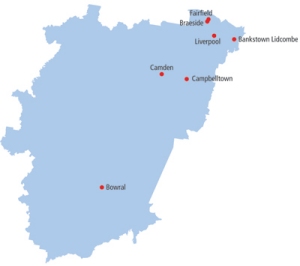